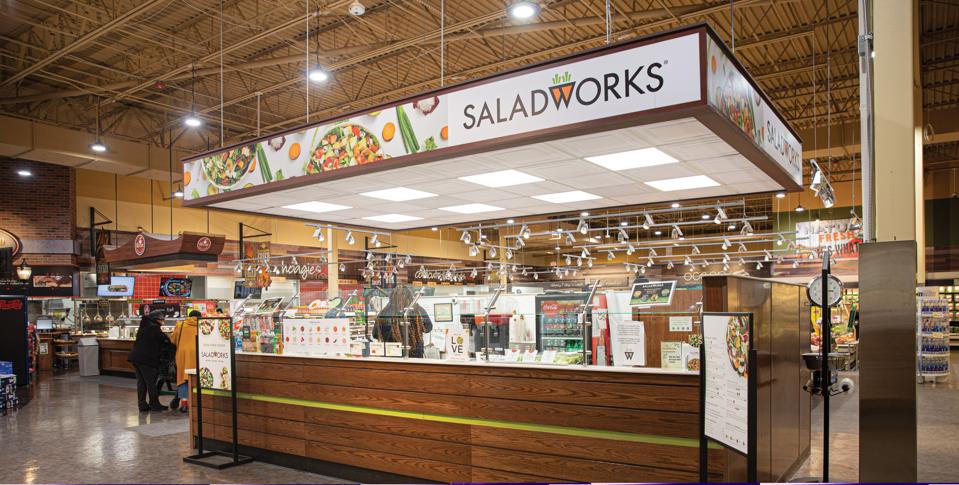 At the Shoprite in Wyncote, Pennsylvania, a Saladworks kiosk shows the partnership between the two … [+] COURTESY OF SALADWORKS

But Saladworks, another salad specialist, has established a partnership with ShopRite supermarkets that establishes a new revenue stream. Saladworks has 114 locations, and is mostly franchised, with only seven of them company-owned.

So far, Saladworks is selling its salad specialties in four ShopRite locations, three located in Philadelphia and one in Baltimore. And four more are on the way, including two more in Philadelphia and two in Staten Island, N.Y. going live in October and November.

The salad bars are situated in a separate kiosk where only staff has access to the food to ensure safety.

Saladworks pays rent to ShopRite so that both parties have vested interests in their mutual success. Opening more locations is dependent on ShopRite’s owners agreeing to the partnership but Saladworks is exploring partnerships with other national chains (more about that later).

But the partnership with Shoprite started pre-pandemic, explained Kelly Roddy, the CEO of Saladworks, based in Conshohocken, Pa. “There were more restaurants on the street than ever before,” said Roddy.

“We started looking to go into places where no had restaurant had gone,” he said. Why not place them in supermarkets?

Its partnership with ShopRite places the four Saladworks in mostly low-income neighborhoods in Philadelphia and Baltimore, “where some brands won’t go,” Roddy noted. Most of these neighborhoods are referred to as “food deserts,” he said, because they lack healthy food.

Shoprite’s owners were dedicated to their working-class neighborhoods and wanted to bring healthy food to them. Moreover, bringing in a Saladworks’ kiosk would differentiate them from their many supermarket competitors.

Pre-pandemic, Roddy emphasizes, its goal was to “get ourselves in front of a potential guest at lower real-estate price and, in a way, to serve the community.”

Post-pandemic, when indoor dining is prohibited in most cities, it’s become “not a side project, but a real opportunity. It’s become a need because they’ve closed buffet salad bars in most supermarkets,” Roddy noted.

Saladworks has learned to streamline its menu in supermarkets, which reduces spoilage and keeps its costs down. Unlike in its stand-alone restaurants, it doesn’t sell soups or sandwiches, just salads.

To ensure safety, only its employees handle the salads, not the customers, and they’re in special kiosks with glass partitions. Their staff follows National Restaurant Association guidelines including wearing masks, changing gloves every several hours, and temperature checks for staff.

Asked why people order a salad from Saladworks in a supermarket when they could buy the ingredients there and prepare them at home, Roddy replied, “Most people don’t want to roast their peppers, or buy goat cheese for one-time use, or use the Chipotle ranch dressing, which will sit in the refrigerator for a long time.”

Saladworks’ 114 restaurants are bouncing back. Based on their doing carry out meals, digital sales and an upswing in third party deliveries, they’re doing about 80% of their normal revenue.

“We saw the shift coming,” and stepped up agreements with several third-party deliverers. “It takes several months to get everything in place,” Roddy acknowledged.

Saladworks has continued to grow at a steady pace. It’s already opened 25 new stores so far in 2020, and Roddy sees about 22 or more coming before year’s end, including a dozen located in supermarkets, eight stand alone, and two college locations.

What does it take to thrive during a pandemic for Saladworks? Roddy replied, “having all the digital tools up and running” is a good start. Opening in supermarkets to create a new revenue stream was another boost.

Next up, he says are ghost kitchens, where food is ordered for take-out from a central location. The trick is learning to be adaptive.

For the Forbes article: https://www.forbes.com/sites/garystern/2020/09/02/saladworks-partnership-with-shoprite-creating-a-new-revenue-stream/#3cf8dc0b7266